1D Chess is a fun, innovative chess variant played on a single row of 16 squares. Each player begins with one of each piece and must take their opponent’s king to win. The rules are intuitive for new and expert players alike, and offer a refreshing twist on the classic game of chess.

In 1D Chess, Bishops and Queens can travel long distances along every other unoccupied square

It's not just a novelty game! Doc Pop's One-Dimensional Chess is rich with strategy and surprises. By reducing it down to just one-dimension, beginners and intermediate players will often have an easier time thinking a few moves ahead. Advanced players will get a kick out of the novel new strategies each game requires to win.

This game is available as a free PDF download that you can Print and Play at home. It's designed to work with normal sized chess pieces, but some cut-out chess pieces are included in the printout if you don't have existing pieces handy.

So, what are you waiting for!? 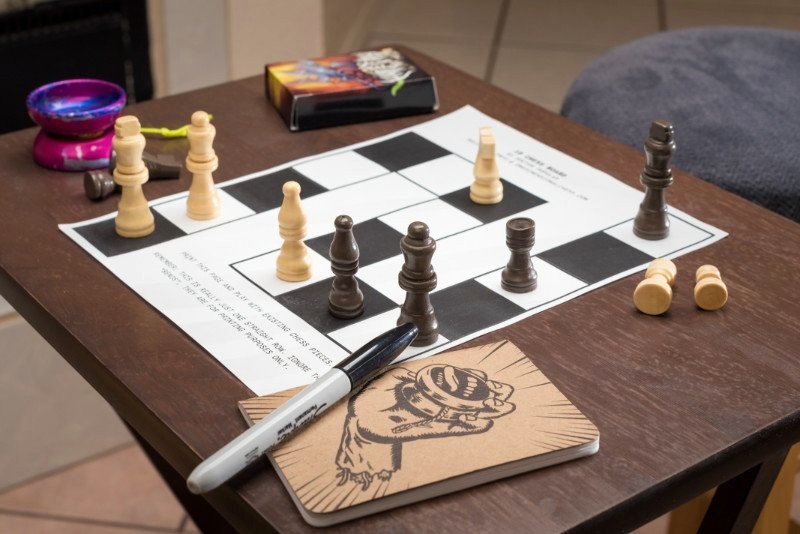 If space is an issue, or you are just feeling bold, try the single-page version of the 1D Chess board. No assembly required and the pieces still travel as if they are on a straight row.

What you'll need to play:

When setting up, the white King should be on the edge of the board with the black square

The object of the game is to checkmate (threaten with inescapable capture) the opponent’s king. Players take turns moving their pieces, one at a time. Chess pieces may not move to a square occupied by another chess piece of the same color. However, a player may capture an enemy’s piece by moving onto its square. When that happens, the enemy piece is captured and removed from the board.

Pawns travel forward one square. On its opening move, a pawn may move two squares instead of one, but only if both of those squares are unoccupied.

Bishops travel along every other square in either direction. If a Bishop starts on a black square, it only moves through other black squares (ignoring any and all pieces on white squares)

Doc Pop's One-Dimensional Chess is now available on Tabletop Simulator as a two player game. We've added scripting to the pieces to enable players to see what moves are available for each piece. This is a great way to play with friends online and it's totally free (if you already have TTS installed).

Doc Pop's One-Dimensional Chess was created by Doctor Popular in 2018. It’s protected by an Attribution-Noncommercial 4.0 International license (CC BY-NC 4.0). You may remix it and share it with attribution, but you aren’t authorized to sell it. The chess icons on this page were created by DEMOGRAPH from the Noun Project, please credit them too if any of this art is reused.

The Future of 1D Chess

Actually, I don't know if I'll do a Kickstarter for this. I'm thinking about Gamefound now, or crowdfunding through my own site.

Are you a BoardGame Geek user? Rate and review Doc Pop's One-Dimensional Chess on BGG here.

The rules for 1D Chess are currently available in English, German, and French. I'd love to offer other languages as well, if you'd like to help, please let me know.

Thanks to Bruno Bord for the French translation and Michael (from www.papierspiele.at ) for the German translation.

"... I dreamt up what sounded at first like an absurd challenge: to compress chess into one-dimension." - Douglas Hofstadter writing in a Scientific American article from 1985

In 2017 there seemed to be no shortage of pundits saying things like "Trump is playing 3D chess" to describe actions that made no sense to me. In response, I thought it would be funny to create a working version of a one-dimensional chess game. Considering how many other 1D chess variations have popped up since then, it appears I wasn't alone in my thinking.

It turns out a few different variations for one-dimensional chess rules were published as far back as 1980 by Martin Gardner in Scientific American magazine. Some have fewer pieces, some have more squares, but the basic idea was similar. Most notably, Dam Glimne proposed a 1D Chess variant in 1977 that I think has aged the best. Glimne's version has two bishops per side and 18 squares, but otherwise looks like it very similar to what I developed 40 years later. Glimne's version also has the king moving up to two squares at a time, where my version is just up to one square.

In 1985, Iain Banks casually describes two players enjoying a game of one-dimensional chess in his novel "Walking On Glass". The rules are not described in great detail, but he does describe the bishop as traveling along every other square. You can read that full chapter here.

Although not fleshed out game, you can even find single row chess puzzles from as far back as 1925. Like this puzzle that was recently republished in Chess Eccentricities. Can you find white's mate in two? 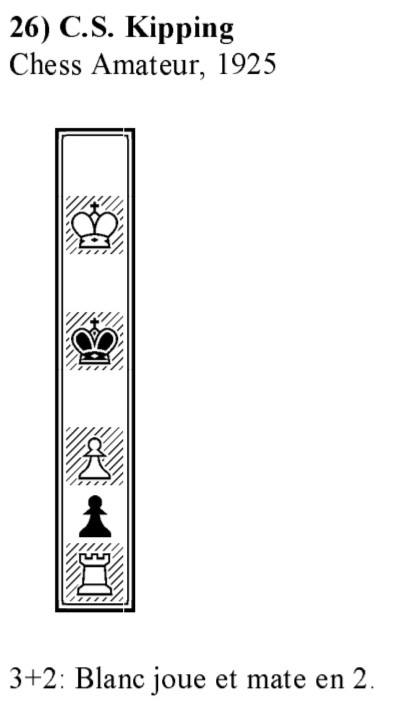 Some recent additions to the world of 1D Chess include an instructable on how to make a nice board, this programing course with descriptions on how to program 1D chess, and this game on Itch. My friend Kurt Dekker has also released a One Dimensional Chess app for Android based on my rules and set up.

My version of 1D chess was finished in 2018 and demoed at several gaming conventions for a few years, but I decided to take a break from 1D chess so I could focus on releasing KnifeTank: The Shüffling instead. I was surprised to see how many other 1D Chess games have popped up in the past year, but I imagine they were equally surprised to see mine too. 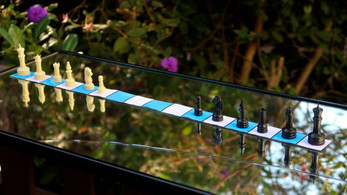 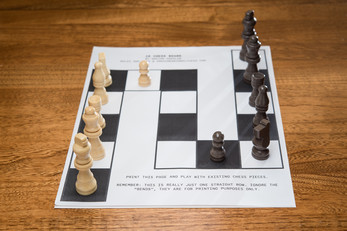 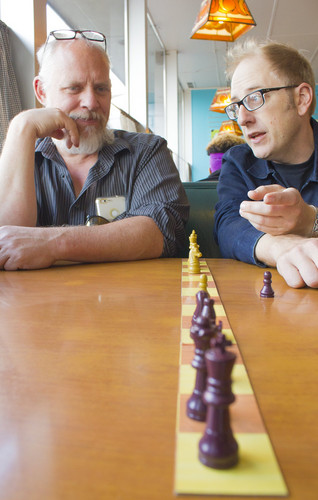 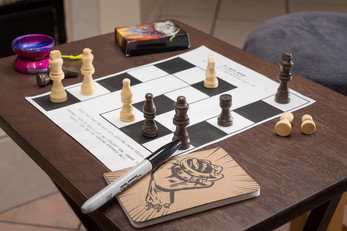 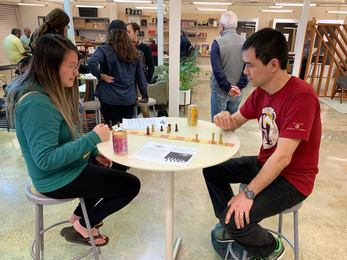 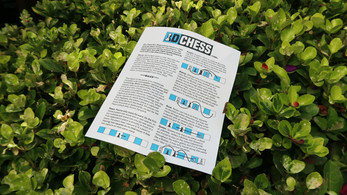